I find it interesting that so many of these stories are flashfic written to prompts, and (as mentioned above) that I like them better with some distance. What's missing is writing my own ideas, in part because I haven't been struck with enough ideas to write -- and when I have been hit with an idea, more often than not the writing has fizzled when I don't have a deadline to push toward. (I doubt I would have finished "The Right Partner" or "Face the Music" if they hadn't been Big Bang stories.) I've always known that deadlines are helpful to me, but I still miss the rush of inspiration. There hasn't been as much of that lately. But more on that when I get to my goals post. Stay tuned.

This entry is also posted at http://owlmoose.dreamwidth.org/732227.html. There are currently

1. Write at least five days per week, and do at least one half hour writing sprint per week. Yes on the first, didn't manage the second.

dragonagebb story on the assigned posting date (not yet known). Success!

3. Write and post the two prompts I claimed for

areyougame (Dec. 7 and Dec. 26). Also success, although both of them were late.

4. Finish the last posting prompt and continue posting at least 2-3 times per week. I never did get that last prompt done -- I'll take care of it soon. (I also let several Tumblr fic prompts lie fallow.) In the three full weeks of December, I did post three times per week.

5. Archive/crosspost the rest of my flashfic for 2015. I ended up finishing this early today; does that count?

6. If time left over, then Wardens of Ivalice. Nope. I did pick up World of Thedas Volume 2 though.

1. Continue tracking wordcounts and monthly goals. Check in with

ushobwri at least three times a month, and share with the weekly workshop at least twice a month. Yes on the first, no on the second. I've come to realize that my regular participation in

ushobwri was much easier when I was mostly unemployed. Now that I spend many of my days in front of a work computer where I don't feel comfortable doing personal stuff, it's a lot harder to remember to pop in and participate. So although I don't plan to leave the community, I suspect my commenting and checking in will continue to be sporadic.

2. Finish with all current WIPs and owed fics by the end of October. Make progress on Wardens of Ivalice. Not even. I poked at WoE a little, and I wrote one of the giveaway fics, but other than that... I have to say this wasn't a particularly smart goal; although I still want to accomplish these things, I need to come up with a better way of doing it.

3. Participate in at least one Big Bang that's not the DABB. This one, I did accomplish -- the Steve/Peggy/Angie story for the WIP Big Bang.

4. Post or crosspost to DW/LJ at least three times a week. Archive all Tumblr and flashfic on AO3 on at least a quarterly basis. Although I wasn't particularly consistent about either of these things, I feel like I did post more, by taking on some journal writing projects. I'm going to look for ways of doing more of that in 2016.

As I was going through past writing goals posts, I came across this entry that I wrote about The Little Hater in September 2014. It's still depressingly relevant. Darn that Little Hater! She is very stubborn. I wish just reminding myself about The Little Hater was enough to make her go away, but sadly it does not work like that. I'd like to say something grand about how 2016 will be the year I vanquish The Little Hater once and for all, but of course it doesn't work like that, either. But this can be the year that I start to manage it a little better, and come up with strategies and goals that help me work around it.

Another thing I did was look at my wordcounts year-to-year for the first time since I started tracking regularly, which was in 2010. Behold: 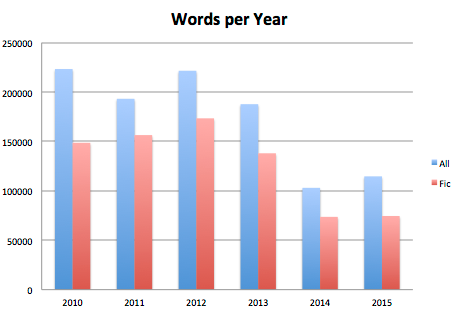 The big drop-off actually began in the fourth quarter of 2013, but still, the difference between 2013 and 2014 is striking, and although I did a little better this year, I wouldn't really call it a recovery. As a result, I've been thinking about the things that have changed over that time, and I can come up with a few -- my long-term job instability, some personal health issues, the amount of time I spend on Flight Rising. Some of those things I can't change and others I can (I don't want to quit FR, but I could certainly manage my time there better), but one thing I can easily change is going back to

getyourwordsout. I stopped doing GYWO after 2013, when I missed the goal and decided I was not interested in word count as my ultimate measurable outcome. Although I still have issues with straight-up words written as a metric, I'm wondering now whether the structure of that community, with its rough daily goals and accountability of monthly reporting, kept me not only writing but writing in longer blocks of time. I mentioned this last month, but one of the things I've noticed lately is that I've been doing too much of my writing in dribs and drabs. There's something to be said for taking advantage of small bits of time where you can get them, but longer writing sessions are so important for getting into a flow state.

Anyway, it's worth a try. So I'm going to sign up again, at the 150k pledge level, and see how it goes. I can always let it go if it's causing me more stress than necessary.

I'm also keen to look for new sources of inspiration. New challenges, new fandoms, new communities. I'm in the process of working on that, so they may not all work their way into my 2016 goals, but I reserve the right to adapt those goals to changing conditions. Impossible or outdated goals are of no use to anyone.

1. Write at least six days per week, with at least one half-hour writing sprint per week.

2. Annual WIP triage. Set aside anything that won't get finished, and finish and post at least one story.

3. Post to LJ/DW at least two times per week.

2. Participate in at least one Big Bang and one fic exchange that I've never done before.

3. Set aside one month to work on Wardens of Ivalice as my main project for that month.

5. Archive all flashfic to DW/AO3 on a quarterly basis.

This entry is also posted at http://owlmoose.dreamwidth.org/732626.html. There are currently