1. Write at least six days per week except while traveling (the last week of the month). Pretty close; it looks worse than it is because I didn't write at all on my trip.

2. Finish and post Wardens of Ivalice Part 2 before I leave on 12/27. This didn't happen; see below.

3. Finish and submit story for Winter's Crest Gifts, also before 12/27 (due on 12/31). Success! This is the aforementioned story that hasn't been revealed yet.</em>

4. Write and post at least two substantial articles for my journal and/or

ladybusiness. If my new weekly linkspam project counts, then yes. If not, then I think it's still a yes, because I wrote a book review for LB and another for The Book Smugglers, although that wasn't published until today. Still, this makes the first time I've ever written an article for a blog that isn't Lady Business, which is pretty exciting!

ushobwri at least once per month. Stretch goal: hit 150k pledge amount. I missed reporting my wordcount in June, but I basically excused myself from life that month. I've officially moved on from

ushobwri. Not even close on the stretch goal; more on that below.

3. Set aside one month to work on Wardens of Ivalice as my main project for that month. I did this in April, and I got exactly what I wanted from it: momentum. From that point onward, I worked on the story at least a little every month, and it went to beta at the end of November. Although life intervened and my beta hasn't had time to get me edits yet, I still feel very good about my progress, and I have high hopes for getting Part Two published this month or next. (This is part of why I have so many fewer published words in 2016 -- almost half of my fic words are on Wardens of Ivalice.)

One related thing I wanted to mention: in 2015, I set myself a goal to finish all my outstanding WIPs. That was far too broad a goal and I failed it utterly, but I kept the idea in mind when I created monthly goals throughout the year, and of my three outstanding giveaway fics, I wrote and published two of them (and the third is for someone who vanished from fandom over a year ago, so I don't feel so bad about leaving it on hiatus).

4. Participate in at least two journal-writing challenges/projects. Between

lady_business and my weekly linkspam project, I'm going to call this one a yes.

5. Archive all flashfic to DW/AO3 on a quarterly basis. I sometimes had to nudge myself at the beginning of a quarter, but mostly yes -- although I wrote so little flash this year that it hardly mattered.

So the trend of less writing continues -- although I wonder if at some point I will have to consider this level of productivity a new normal. I hate the idea of that, though. Here's my updated year-by-year chart: 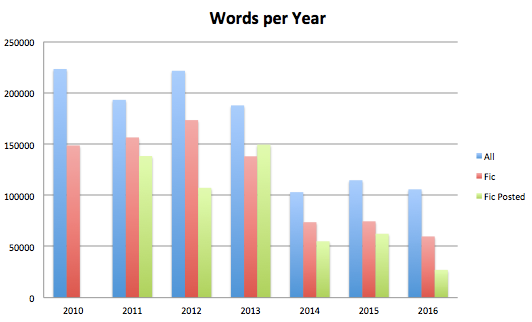 I included fic words posted this year (note that I didn't track that number in 2010), so you can see how badly that cratered this year. Maybe what I miss most is the flashfic. I suspect this ties in to feeling more disconnected from fandom lately. Keeping up on Tumblr has been both more difficult because of time, and more daunting because of drama. I got way more into Twitter this year, partly because I met Twitter people at cons and partly because it's much easier to pop in and out during my workday. And I enjoy it, but it means I'm not posting fic memes or participating in meta conversations on Tumblr, which was better from a creativity standpoint. On the other hand, I am writing on DW somewhat more than I have in recent years. Not enough to balance the numbers out, but somewhat.

Anyway, let's do some goals. In January:

1. Write an average of six days per week.

3. Undertake the annual WIP triage, and target one fic to finish and post either this month or in February.

getyourwordsout with the intention of hitting the 150k goal. Yes, that's right. Yes, I know that means I have to write half-again as many the words as I wrote this year. But I wonder if giving myself a wordcount metric to meet will get me back into writing more words at a stretch. I tried to get myself into that this year by scheduling writing sprints, but I rarely succeeded in doing so. I think it's at least a worthy experiment.

2. Keep up the regular linkspam posts in my journal; write at least one, ideally two posts for

ladybusiness every month; and stay on top of contributing to

3. Participate in at least one Big Bang and two fic exchanges. Of these, at least one of these should be new to me.

4. Once Wardens of Ivalice Part 2 is finished, pick a month to prioritize writing a first draft of Part 3, with a goal of getting it posted sometime in 2018.

5. Find a fic prompt community I like and participate regularly. Recommendations welcome!

This entry is also posted at http://owlmoose.dreamwidth.org/765776.html. There are currently